Sainte-Croix-du-Mont is a pretty perched village in Gironde. It is installed on a rocky escarpment, well opposite the alluvial plain of the Garonne and the Sauternes vineyards, which unfold at its feet. Here, a great sweet wine has made the village famous, but today we are leaving for an unusual visit to its fossilized oyster cliffs. A geological curiosity that dates back (with a ladle!) 22 million years ago, a journey through time and a moment of calm because this village is a haven of greenery and peace. Let's go ?

Come and stop in this pretty village, not far from Verdelais, between Cadillac and Langon. After a country road which crisscrosses towards the top of the rocky promontory (demanding but very pleasant by bike ), park in the car park and set off to discover the riches of the village: its church classified as a Historic Monument, its magnificent viewpoint with orientation table and interpretation of the landscape on the alluvial plain of the Garonne, its fossil oyster cliffs, its Château de Taste and of course, its sweet wine and the wine castles of the region! For this visit to the village, I am accompanied by David Souny (in fr) and Léonor Reuzé( in fr), both tour guides in the region. David also participated in the development of the superb panels of the interpretive path that you can follow independently to understand the key points of the village.

Standing at the entrance to the village, it was rebuilt on the spot where the Romanesque parish church stood in the 12th century. It had remarkable sculpted capitals that can curiously be found at the Château de Castelnau-Bretenoux near Martel in the Lot, brought back there by the collector Jean Mouliérat. Appreciate the scene of rope pullers , which adorns the church's magnificent portal, depicting the struggle between good and evil.

Due to its location, perched on a rocky outcrop, Sainte-Croix-du-Mont enjoys an unparalleled view. Here, we breathe and we face the Sauternes vineyard which extends to the Hautes Landes. The alluvial plain of the Garonne also allows the silviculture of poplars. On a clear day, the foothills of the Pyrenees can be made out. To admire this grandiose landscape, you can start near the church and take the stairs that will guide you to the cliffs. Another very beautiful point of view on the vines is on the terraces of the Château de Taste. And the highlight of the show is to sit down at the restaurant which is located at the entrance to the cliff path, a spectacular view to sip a good glass of wine...

You will notice street furniture engraved with the name Orterra, why? It is a reference to the gold of the earth, the sweet wine of Sainte-Croix-du-Mont!

The fossil oyster cliffs of Sainte-Croix-du-Mont

Here you are faced with an almost unique geological curiosity, a shelled cliff dating from the Tertiary air, a real journey through time at a glance... These oyster cliffs are a rare geological phenomenon, which should be appreciate the nature of the concentration: It is a Lumachelle, an accumulation of marine fossils of the same species.

Let's go back some 110 million years.
The sea , which is present here, is warm and shallow. 70 million years ago the dinosaurs disappeared. 40 million years ago it was plate tectonics, Africa and Europe gave birth to the Pyrenees which moved and brought out the land that was once submerged under the sea.
At -30 million years ago, it was at this time that the Astéries limestone formed (a type of slightly yellow rock with fossils, the most common in Bordeaux, used for freestone, which you find in particular in Libourne). The Entre-Deux-Mers region where we are is pushed out of the water, here we are on the banks of the inland sea of the Gulf of Agen (in Lot-et-Garonne).
At that time, the dinosaurs disappeared but the Men did not arrive yet, on the other hand the oysters of Sainte-Croix-du-Mont, Ostrea aquitanica did! They curl up in tight schools. The sea sometimes withdraws, new areas of banks are created and they are deposited in more or less regular strata. With the erosion of the last million years, it is difficult to say where the sea was at that time, but there are still some traces in "piles of plates", superimposed shells which have accumulated over 3 million years.

The Castle of Taste

After passing by the cliff and observing the oysters, go up to the park behind the Château de Taste. You will see large remarkable trees, its fortified enclosure and you can walk around the castle until you come back to the entrance and the belvedere on the terrace of the house which offers a view overlooking the Garonne. It is a castle which dates from the 14th and 16th century. It was restored in the 19th century and has now been the town hall since the 1970s. There are the remains of an old tower, a 14th century trefoil window and Romanesque type openings which date back to the 18th century.

Do you like treasure hunts? Are you looking for a way to come and visit Sainte-Croix-du-Mont with the children , encourage them to accompany you? Trust Tèrra Aventura to help you and make you have a good fun time, with the quest "Saint and Cross make oyster". To be found by downloading the application on your Smartphone, all you have to do is play and it's free!

We wish you a very nice visit to Sainte-Croix-du-Mont, do not hesitate to go there at the end of the day and reserve a table to have a good glass of sweet white wine from the region, in front of the splendid view. (book …).

On its rocky hillsides, the village overlooks the Garonne valley. The limestone cliff which extends over a hundred ...

Surrounded by ramparts, Saint-Macaire is a remarkable medieval architectural ensemble, with many listed monuments, ...

Located in the commune of Sauternes, south of Langon, Yquem Castle is one of the great names in the Sauternes wine ... 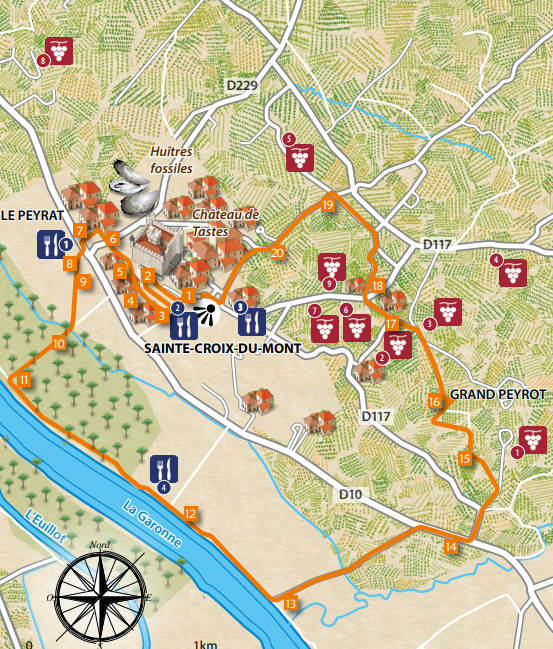