Verdelais
Share Verdelais: a breathtaking view and the Way of the Cross walk

On the way for a beautiful walk to do all year round, in Verdelais, a pilgrimage town where there is a magnificent Way of the Cross, to climb in peace in the middle of the woods, before arriving at the top, with a sumptuous panorama on the Sauternes vineyards , the Girondine moors and the neighboring towns and villages. We will also see the tomb of the painter Toulouse Lautrec there , it was a region dear to his heart. Choose a beautiful sunny day to enjoy the rays playing hide and seek with the trees ...

Part of the view that awaits you

In Verdelais there is a Marian shrine (veneration to Mary) initiated by Géraud de Graves in 1112. Returning from the crusade, the knight decides to lead a hermit's life and chooses Verdelais to retire. He built a small chapel where he placed a statue of the Virgin. From 1185, we see that miracles take place and over the centuries, this innocuous place has become a major stage of pilgrimage bringing together up to several thousand people during religious festivals. Verdelais is a small village nestled in the wine-growing hills, on the outskirts of Langon. The presence of the sanctuary transformed the town and in the 17th century, a monastery was built next to the church, itself enlarged. In the 19 th and 20 th century, the pilgrimage was promoted, the church restored, elevated to the rank of basilica in 1924 and to welcome pilgrims, two main alleys were built lined with hotels with beautiful facades. At the end of the 19th century, Mount Cussol which lies south of the church, a Way of the Cross with 16 chapels and altars protecting an ordeal with three monumental crosses are erected.

They say that a distinguished guest made a drawing of great value on the door of a cupboard in this old bar ... Who? Read a little further to find out ...

To make this walk a real cultural walk, follow the visit of Verdelais with Léonor Reuzé, guide-lecturer (in French) who accompanied me to discover this pretty village and its Stations of the Cross. Contact her to know the dates of visit to Verdelais!

Today, the borough of Verdelais is a registered site, you will appreciate a walk in this group of religious buildings (classified as historic or registered monuments), highlighted by the architecture of the small center. Go to the square in front of the basilica, look up high up to the golden virgin and do not hesitate to enter the church . To the north, it is the former Celestine convent.

The Convent adjoining the basilica

Visit the Musée d'Art Sacré de Verdelais to understand the enthusiasm that this sanctuary has exercised for more than 900 years, on generations of fervent pilgrims.

The tomb of Henri de Toulouse-Lautrec in Verdelais

En route to the Wayof the Cross, you will pass the cemetery, which is home to an illustrious host in many ways. Henri de Toulouse-Lautrec (1841-1930) was buried in Verdelais because of the proximity of the Château de Malromé, which was his haven of peace. Her mother, Adèle Zoé de Toulouse-Lautrec lived there, it is said that they had bought this property with the dowry of her mother, of which she had recovered a part to separate herself, with Henri's father (no divorce at the time !). It is also said that the painter sometimes went to drink a few glasses of absinthe in a village bar, while his mother, full of devotion, went to mass on Sundays. We even found a cupboard painted by Toulouse-Lautrec in the bar in question ...

The tomb of Henri de Toulouse-Lautrec

The walk on the way of the Cross in Verdelais

After exploring the village, en route to the heights , along the Way of the Cross, the beginnings of which date back to 1700. It was at the end of the 19 th century that the whole project saw the light of day thanks to Cardinal Donnet. The hill of Cussol is a popular place: planted with large trees, it inspires meditation and tranquility. By taking this via crucis, we pass in front of La Chapelle de Sainte-Agonie, then stations materialized by 14 small identical chapels. It was the sculptor Marcial Clerc who made them, as well as the altars inside and their terracotta ornaments , representative of the passion of Christ. In front of each scene, we can meditate , take the time to contemplate these sumptuous sculptures, with lively and frank details of expressions, giving the whole an exceptional and unique character. At the top of the path is the Chapel of the Holy Sepulcher with its domed roof, which houses an entombment scene, still in extremely pure terracotta.

Go up to the right of the cemetery, just in front of the basilica

The last chapel at the top

Here we are at the top of the hill and to admire the last work, we have to go around the chapel admiring the magnificent view that unfolds… The Calvary is made up of 3 monumental crosses, Christ is at the center of the composition and the whole is erected at the top of a platform which is accessed by a staircase (condemned and awaiting renovations).

At the top of Mont Cussol

Calvary, its 3 monumental crosses and the angels awaiting restoration

End of the walk, or continue to the Calvary Loop

At this point in the walk, you are at the top of the hill and you are invited to contemplate the grandiose panorama, more than 180 degrees over the countryside. In front of you, the Garonne that we become in the nature of the trees which border it. The vines are those of Sauternes and in the distance, the Landes Girondines, it is the limit with Entre-deux-Mers .

The splendid view at the top, which rewards a short walk

On one side the vines of Entre-deux-Mers

On the other, the Garonne in the distance, the Sauternes and behind, the Girondine moors

In clear weather with little cloudiness in winter, you can sometimes see as far as the Pyrenees!

Along the crest of the hill, you can admire the Cussol Mill dating from the 18th century. It was owned by the monks of the sanctuary, who used it for making bread. They also owned the land around the Domain of Malagar. The mill fell into disuse and ruin in the 20th century and it is the town that was acquired in 1997. An association was formed to revive this witness of the past, officially opened in 2003. Since then he is open to visits all year round. Contact the Friends of the Moulin de Cussol association or the Verdelais Town Hall.

Our walk ends here, bypassing the mill, we go back down to the village. Hikers can choose to continue following the Calvaire loop (in French) which is materialized and then allows you to reach Le Domaine de Malagar, Saint-Maixant church, the Garonnelle landing stage: a loop of almost 10 km in the countryside of the Entre-deux-Mers, perfect all year round! 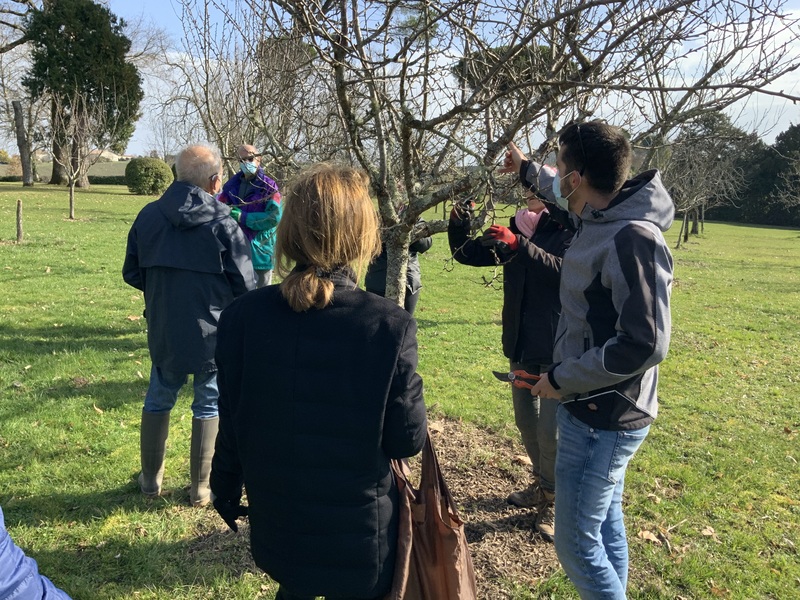 On its rocky hillsides, the village overlooks the Garonne valley. The limestone cliff which extends over a hundred ...

Surrounded by ramparts, Saint-Macaire is a remarkable medieval architectural ensemble, with many listed monuments, ...

Fargues Castle is a wine estate in the Sauternes vineyards, south of Langon, on the left bank of the Garonne. The ...

Located in the commune of Sauternes, south of Langon, Yquem Castle is one of the great names in the Sauternes wine ...